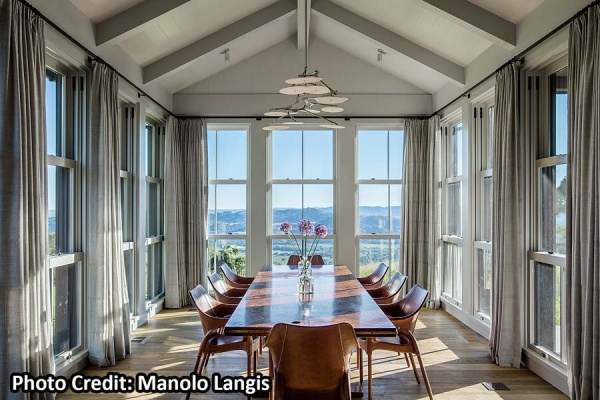 
The Alexander Valley of Sonoma County is home to many California wineries and vineyards. The valley was named for Cyrus Alexander, an owner of part of the 1847 Rancho Sotoyome Mexican land grant. Local wine-making in the area dates back to 1843, when Alexander established the viticulture by using vine cuttings collected from Fort Ross, CA. The Alexander Valley was known for mass-produced bulk & jug wines made from field blends of red grape varieties until the late 1960’s when new wineries began operation, and over the years began to produce wines that have found commercial success and critical acclaim.

This ranch home was designed by Wade Design Architects to aesthetically fit the environment of the Alexander Valley. Large window and door openings allow ample natural light to fill the home, while exposing the majestic views of the area. Along the higher elevations of the Alexander Valley rim, both Taylor Mountain and Sonoma Mountain can be viewed to the South.

Parrett manufactured aluminum clad triple hung weight & chain windows which were installed in a dining area of this breathtaking home, allowing natural ventilation of the home while also providing an unobstructed ability to take in the majestic view of the outdoors. The high transparency screen mesh utilized also enhanced the view through these windows. A weight & chain configuration allowed these large units (with sizes up to 56” X 106”) to be effortlessly operated, and also allow all (3) sashes to travel fully from the top to the bottom of the window frame.

These windows were constructed of clear vertical grain douglas fir lumber with a custom color extruded aluminum clad finish. The Oil-rubbed bronze finished solid brass window locks, lifts, chains, and pulleys will provide years of reliable service while providing a timeless, elegant appearance. LoE 272 glass was utilized to enhance the thermal performance of the windows and also featured SDL grilles that included a custom interior wood grille bar. Parrett was proud to be a part of the design of this beautiful home in the Alexander Valley of California.