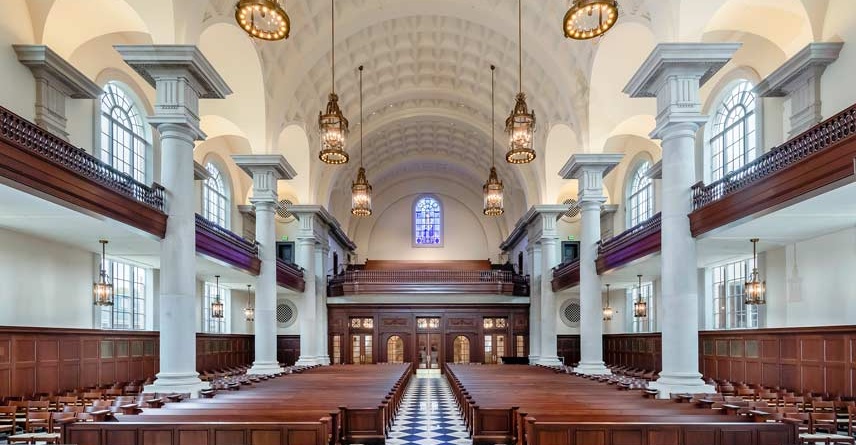 Hillsdale College was founded as Michigan Central College in Spring Arbor, Michigan, in 1844, before moving to Hillsdale in 1853 and assuming its current name. As stated in its Articles of Association, the College undertakes its work “grateful to God for the inestimable blessings resulting from the prevalence of civil and religious liberty and intelligent piety in the land, and believing that the diffusion of sound learning is essential to the perpetuity of these blessings.”

Established by Free Will Baptists, Hillsdale was the first American college to prohibit in its charter any discrimination based on race, religion, or sex, and became an early force for the abolition of slavery. It was also the second college in the nation to grant four-year liberal arts degrees to women.

Marking the 175th anniversary of the College, Christ Chapel was officially opened on October 7, 2019, with an address from Clarence Thomas, associate justice of the U.S. Supreme Court. Christ Chapel was designed by Duncan Stroik, a prestigious architect and University of Notre Dame professor who has designed prominent religious spaces throughout the U.S.

Inspired by London's St. Martin-in-the-Fields, Hillsdale's 27,000 square foot Christ Chapel can seat up to 1,400. The brick and limestone facade stands 70 feet tall and terminates a new quadrangle at the center of campus. The entrance portico is a tholos formed by eight Doric limestone columns crowned with a 32-foot self-supporting brick dome. In the narthex are symbols such as the Chi-Rho, Holy Trinity, Ark of the Covenant, and the Dove of the Holy Spirit. The nave limestone columns are 28 feet tall and are integrated with the structure of the building. Over the ten arches of the nave are gold-leaf escutcheons with fruits of the Holy Spirit: Caritas, Gaudium, Pax, Patientia, Benignitas, Bonitas, Fides, Modestia, Continentia, and Castitas.

Parrett manufactured the three french entry door systems, rectangle, and circle top window sashes, and rectangle door transoms pictured above. All units were constructed of mahogany and were stained and clear coated in the Parrett factory. A narrow 7/8” wide true-divided lite window muntin profile was utilized with insulated glass. The doors were specified with custom stile and rail dimensions and also featured a custom 2” stepped glass moulding. All units featured a deep 12.5” frame depth. Parrett is proud to be a part of the storied Hillsdale College campus.

Stationary Architectural
Windows
Click the Image Below to Learn More