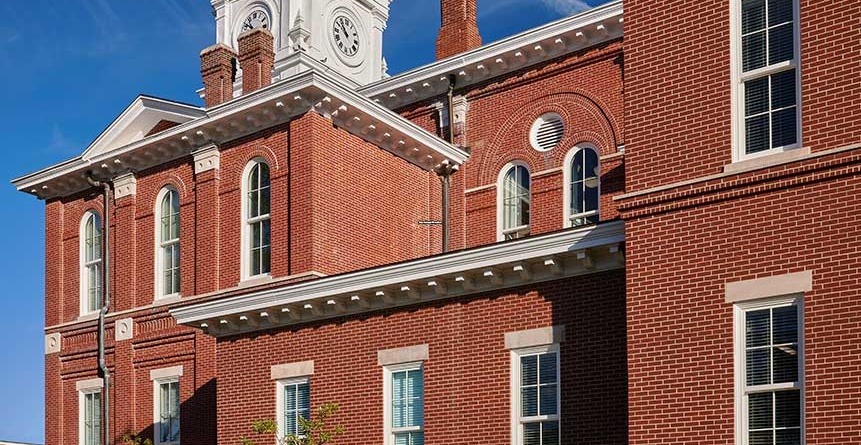 Henry County was founded in 1798 and named after Patrick Henry, the founding father known for declaring "Give me liberty, or give me death" during the Second Virginia Convention in 1775. The Henry County Courthouse was built in 1875, utilizing a mixture of styles including Italianate and Second Empire by the McDonald Brothers, a Louisville-based architectural firm. The courthouse also included a jail and the warden’s house within the t-shaped structure.

JRA Architects embraced the challenge of maintaining the integrity of the original, historic building, while updating its infrastructure to meet the required program and security requirements of a modern judicial center. The original building entrance was preserved, and all the original building spaces were restored or renovated to reflect their historic detailing and function. New, symmetrical accessibility ramps built with salvaged limestone were constructed to either side of the original porch, seamlessly blending modern accessibility with the landmark building and a newly designed memorial entrance park.  The reclaimed stone was also incorporated into a new, public amphitheater that is featured on the east side of the property. A key feature of this project was the replacement of the aluminum windows with historically correct single hung windows.

Parrett manufactured these 121 stationary hung windows with the largest units being over 11 feet tall. These windows were constructed of mahogany to ensure a long lifespan and were factory-painted by Parrett. The window frames allow for the addition/removal of the sashes from the building interior, facilitating an easier installation and cleaning process. A variety of glazing types were utilized based upon the location of the window which included Low-E, bronze spandrel, and Level 3 bullet resistant glass. These stationary windows featured a custom-profile brickmould as well as sash ogee lugs on the top sashes. Interior wood shutters were also incorporated within some of the window assemblies. Lastly, to aid with the construction process, Parrett arranged two trailers to be on-site during the renovation, with logistics handled by their private trucking company. Parrett was proud to contribute to this historically-minded renovation project.