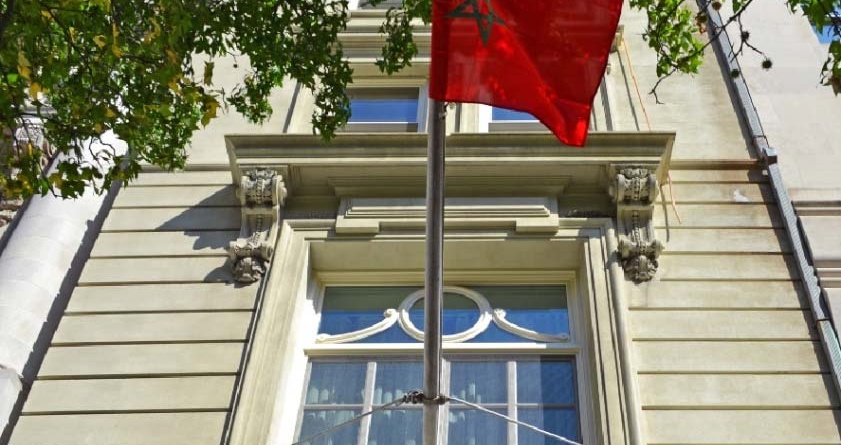 The Consulate General of the Kingdom of Morocco building in Manhattan has a long and storied history. At the end of the 19th century the existing brownstone rowhouses located here were removed to allow for the building of some of Manhattan’s most exquisite mansions at the time. In 1894, Henry T. Sloane began construction of his magnificent limestone palace that encompassed three building lots, and both Oliver Gould Jennings and Benjamin Guggenheim each added a flanking mansion four years later. This Guggenheim mansion would eventually be purchased by the Kingdom of Morocco.

Benjamin Guggenheim was born to Meyer and Barbara Guggenheim and is not the only one of their children to hold a prominent place in New York City’s history as Solomon Guggenheim established the Solomon R. Guggenheim Museum which was designed by Frank Lloyd Wright.

Meyer arrived in New York from Switzerland in 1847 and built an immense fortune in the mining business. At age 20, Benjamin was sent by his father to Colorado to take control of mining operations there. By the end of the 19th century, the Guggenheim’s controlled the majority of America’s smelting/refining industries, and Benjamin became know as the “Silver Prince” due to his successful mining ventures.

As the brownstone house that Guggenheim demolished to build his mansion was only 20-feet wide (the width of a typical Manhattan townhouse) the architectural design would be very challenging in trying to compare with the roughly 60 foot wide Sloane residence next door. While no historical records have been found identifying the home designer, it is generally agreed it was most like designed by John H. Duncan. The designer chose to not directly compete with the ornate aesthetics of the Sloane residence, but instead relied on a dignified and elegant home design.

After the completion of a business trip to Europe in 1912, Benjamin Guggenheim boarded the Titanic to return to America, and this resulted in the history of this home taking a tragic turn. As reported in the New York Tribune, “A steward of the Titanic, who steered one of the boats, told of seeing Mr. Guggenheim stepping into a boat with two other men at a moment when there were no women waiting to embark. He had not seated himself when three women came up to the boat deck. Mr. Guggenheim arose, touched the two men on the shoulder, and motioning toward the women, calmly and the mining magnate took up his position beside the rail without a word.” Guggenheim’s grief-stricken wife, Florette, could not bear to live in the home any longer after the tragic, yet heroic death of her husband, and later sold the house in 1919. In subsequent years, the home essentially remained a single family residence until being purchased by the Kingdom of Morocco.

Parrett provided LPC Approved windows units that consisted of both operable units and fixed transoms. Appalachian cherry tilt/turn inswing casements were configured as factory-mulled to a fixed upper unit, so that the overall window matched the sightlines of a hung window. Accompanying these windows were extremely large french inswing casements (93” X 97”) with fixed transoms featuring intricate custom profile window muntins. All units were factory finished by Parrett and were glazed with insulated, laminated Low E glass and utilized brass multipoint hardware. Parrett was proud to be a part of the completion of this historic renovation project.

Tilt/Turn Inswing Casements
Click the Image Below to Learn More

Fixed Transoms
Click the Image Below to Learn More